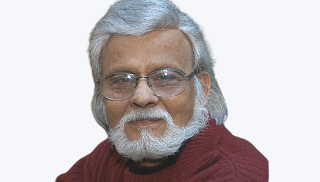 Satish Gujral was born in 1925, in Punjab, India. He is a painter, sculptor, muralist, and writer. He was trained at the Mayo School of Arts, Lahore between 1939-44. Later he joined Sir J. J. School of Arts, Mumbai for a Diploma in Fine Arts (1944-47). His experiments cover almost all spheres that fall under the umbrella of Plastic Arts ; Graphics, Paintings, Sculpture Murals, Object Design, and Architecture.

The Belgian Government honoured Gujral with the “Order Of The Crown” for designing the Belgian Embassy in New Delhi. He is the only non-Belgian Architect ever to win this distinction. The same building was selected by International Jury among 1000 most outstanding buildings built in the 20th Century around the World.

In recognition of his national and international achievements, “Delhi Citizen Council” in 1989 honoured him as one of the twenty-five most prominent of its Citizens with the most significant contributions to the prestige of the city made in the last quarter century. Gujral was honoured by both Delhi and Punjab State with state awards; as well as Santiniketan’s highest honor “Desikottama”. He was honored by Mexico`s International Award for “Life Time Achievements” (Da Vinci Award).

In the year 1999 in recognition of his achievements and contribution, the President of India honoured him with “Padma Vibhushan” award.