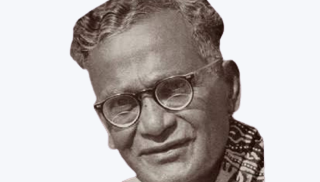 Nandalal Bose was born on 3 December 1882 in a middle-class Bengali family of Kharagpur, in Munger district of Bihar state. His father, Purna Chandra Bose, was at that time working in the Darbhanga Estate. His mother Khetramoni Devi was a housewife with a skill in improvising toys and dolls for young Nandalal. From his early days Nandalal began taking an interest in modelling images and later, decorating Puja pandals.

In 1898, at the age of fifteen, Nandalal moved to Calcutta for his high school studies in the Central Collegiate School. After clearing his examinations in 1902, he continued his college studies at the same institution. In June 1903 he married Sudhiradevi, the daughter of a family friend. Nanadalal wanted to study art, but he was not given permission by his family. Unable to qualify for promotion in his classes, Nandalal moved to other colleges, joining the Presidency College in 1905 to study commerce. After repeated failures, he persuaded his family to let him study art at Calcutta’s School of Art.

Nandalal Bose (1882–1966) occupies a place in the history of Modern Indian art that combines those of Raphael and Durer in the history of the Renaissance. Like Raphael Nandalal was a great synthesizer, his originality lay in his ability to marshal discrete ideas drawn from Abanindranath Tagore, Rabindranath Tagore, E. B. Havell, Ananda Coomaraswamy, Okakura Kakuzo and Mahatma Gandhi into a unique and unified programme for the creation of a new art movement in India. And like Durer he combined a passion bordering on devotion with an irrepressible analytical mind that compelled him to prise open different art traditions and unravel their syntactic logic, and make them accessible to a new generation of Indian artists. But he did this so quietly and without self-assertive fanfare that the significance of his work is yet to be fully grasped even in India.