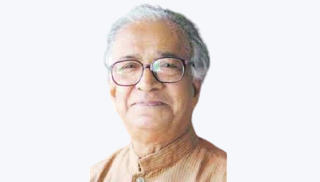 K G Subramanyam or Mani Da as he was called was primarily influenced by Kerala folk art and Bengal-Odisha Pattachitra. In his paintings, he often introduced strong contrasting elements between Indian mythology pitted against human beings as well as animals, in his endeavour to depict a range of complex and conflicting reflections.

The never ending conflict between the good and the evil occurred as a recurring motif through majority of his paintings. Regarded to be a fine draughtsman, he never deterred from the construction rules which are evident in his work with “distorted figures” as well. K G Subramanyam was awarded the Padma Vibhushan in 2012.