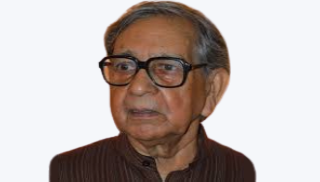 Born in Jamalpur in 1936 , he moved to Kolkata in 1950 and joined the Government College of Art & Craft, from where he graduated in 1956. He then joined the Archeological Survey of India and got the opportunity to study the Ajanta cave paintings.
Mostly abstract in nature, Ganesh Haloi’s work bears a strong connection with one’s inner psyche, exploring one’s pain to offer his point of view. According to the artist, every human goes through a pain and this where one should leave everything else to know oneself, in a manner never done before. His artistic vision is guided chiefly by themes of pliability, calmness or devastation. His perspective is teemed with the philosophy of acceptance that is often depicted by the use of thick colours spread with uncanny ease.
Ganesh Haloi is the recipient of Late R. N. Chakarborty Memorial Gold Medal from the Government College of Art, Kolkata along with a string of awards
and accolades from prestigious institutions like: Academy of Fine Arts, Kolkata , Seven Gold Medals from AFA , Cash Prize, from Lathan Foundation U.S.A, The Siromani Puraskar from Rabindra Bharati, Award from Ministry of Health, Government of India.