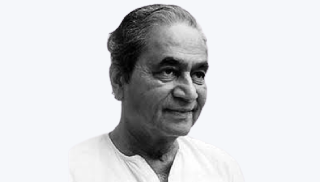 Badri Narayan’s style and theme is perhaps best expressed by the above personal statement. Symbols often played an essential role in his works thus assuming a perspective that is all the way autobiographical as well as self-reflective.

Although he had no formal training, Badri Narayan began painting at an early age and had his first ever public show in 1949. His works primarily depicted a subtle range of freedom and intimate offering with a deep touch of fantasy stylised in a two-dimensional framework in inks, pastels & watercolour.

Besides being a painter, he was also a writer and illustrator for children’s books and had been bestowed with numerous awards and accolades including the prestigious Padma Shri in 1987 and the Maharashtra Gaurav Puruskar in 1990.