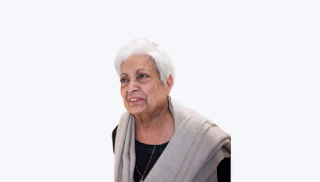 Zarina Hashmi was born in 1937, in Aligarh, India. She received a BS in mathematics from Aligarh Muslim University in 1958. Before she moved to study printmaking, this was the passion that was awakened by her encounters with local papermakers during a visit to Rajasthan. Zarina went on to study further the process of intaglio under Stanley William Hayter at Atelier 17, Paris between 1964–67 and woodblock printing at Toshi Yoshida Studio, Tokyo, on a Japan Foundation Fellowship (1974). Later, she has taught at Bennington College, Cornell University and the University of California in Santa Cruz.

Zarina’s had varied interests in different media – like drawing, printmaking, and sculpture. Her abstract and minimal style in work explores concepts and themes of home, displacement, borders, and memory. It is because of her early interest and study in math and architecture that is revealed in her practice through her formal sensibility and emphasis on structure. Her minimal approach to the use of line on handmade paper, often including calligraphic text in Urdu, which is her home tongue. In her artistic representation, thick, rough lines are often deployed to depict political borders and suggest collective memories of violence and the marginalization of groups regarded as ‘others’.

In addition to many solo & and group art exhibitions, her work has been featured in the permanent collections of the Museum of Modern Art (MoMA) in New York; and the Victoria and Albert Museum in London and the Bibliothèque Nationale in Paris.

Zarina has received numerous awards and has been an artist in residence at various institutions, including Williams College, Williamstown, Massachusetts (2002), and the University of Richmond, Virginia (2007). She was awarded the grand prize at the International Biennial of Prints in Bhopal, India (1989). Zarina was one of four artists who represented India at the 2011 Venice Biennale.