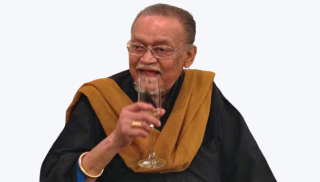 Sunil Das was born in 1939, Calcutta, India. He joined the Government College of Art & Craft, Kolkata in 1955. Later he was awarded the French Government Scholarship to study at the École des Beaux-Arts in Paris. On his return Das joined at the Government of India’s Handloom division, Ministry of Textiles.

He is one of India’s most important post-modernist painters, known for his Bull Series and his piece “Woman” paintings. Das is primarily seen as an expressionist painter. Sunil Das rose to prominence with his drawings of horses. In his series paintings around horses, he was inspired by the force and the strength of the moving horse. “I must have done 7000 horses between 1950 to 60,” In his own words, Das says. “In 1962, I went to Spain, where I was fascinated by the Bullfights”, his series of drawings of raging Bulls are full of force and energy. His works revolves around Man-Woman relationships women in her sexual empowerment and in her loneliness.

In an interview about his artistic style, he said, “To express my authentic feelings about reality, I have to interpret it, I have to conceptualized it. The previous reality gets transformed in the laboratory of minds. Then, I bring it out onto the canvas.”

He had around 88 solo exhibitions across the world including Paris Biennale. He was also the founder member of the Society of Contemporary Artists.

In 2014 the Government of India conferred upon him its fourth-highest civilian award, the Padma Shri.