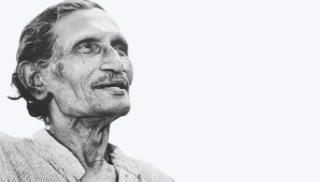 Rabin Mondal born in 1929 in Kolkata, he graduated from the University of Calcutta. Rabindra Nath Mondal was a founding member of the Calcutta Painters. Rabin grew up amidst overcrowded slums and bankrupt migrant workers in Howrah. This environment helped him comprehend the harsh realities of life, which later found a space in his works. Rabin was deeply affected by the Bengal Famine of 1943, the struggle for India’s independence, and the partition of Bengal.

As a young painter, Mondal was attracted by Jamini Roy’s folk style and Rabindranath Tagore’s disquieting paintings and drawings. But the show by French artists was virtually a turning point in his artistic career. This encounter with avant-garde Western art helped him to later incorporate elements from it in his own work.

His works were first displayed in 1955, as part of a group exhibition along with other leading artists of Bengal school. He held his first solo exhibition in 1961 at the Academy of Fine Arts, Kolkata. Mondal’s works are mainly figurative. He paints in bold strokes and creates tableaux, whose themes are universal. The faces of his figures stare at you out of the canvas, strange and pensive, but also strong and defiant. Not yet beaten, surviving by sheer force of spirit. He mostly uses dense pigments in blacks and reds, with only occasional moss green and turquoise colors seeping through.

Rabin Mondal’s work can be found in the collections of The National Gallery of Modern Art, New Delhi, Osians Art Archive, Mumbai, The Birla Academy of Art and Culture, Kolkata, and the Jane and Kito de Boer Collection, Dubai.

Mondal has also been quite active with the avant-garde artist’s organizations in the city. He was the Lalit Kala Akademi member during 1979-82.