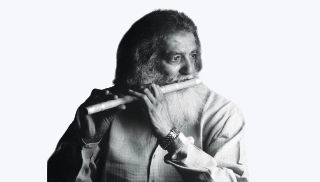 Manjit Bawa, born in Dhuri, Punjab. He graduated from the College of Art, New Delhi in 1958. He studied under Abani Sen, who was very influential on the artist’s distinct style and encouraged him to embrace figurative art when abstraction was a dominantly popular genre.

Bawa moved to Britain in 1964, where he continued his artistic practices and worked as a silkscreen painter. Upon his return to India in 1971, he drew inspiration from Indian mythology and Sufi philosophy. Sticking to his customary palette of traditional Indian colours, such as red, pink, and violet, Bawa created unique and vibrantly coloured paintings, as well as sketches and drawings. His canvases are distinguishable in their colours – the ochre of sunflowers, the green of the paddy fields, the red of the sun, the blue of the mountain sky. He was one of the first painters to break out of the dominant greys and browns and opted for more traditionally Indian colours like pinks, reds, and violet.

Bawa in an interview, “We have been bought up on a staple of ochres, grays, and browns in art, thanks to the British. That’s why when I began using bright colors the reaction was negative, but I persisted. I have been criticized for my ‘ice cream’ colors for years, but they come out of the same Winsor and Newton tubes that other painters use. Bright colors are closer to the heart of most Indians, familiar as they are with these shades.”

Bawa was a part of many group and solo exhibitions. In 1980 he was honored with National Award, Lalit Kala Akademi, New Delhi.