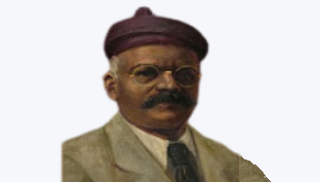 M. V. Dhurandhar was born in 1867, in Kolhapur, Maharashtra. His father understood and supported his son’s extraordinary artistic talents and put him under the tutorship of famous painter Abalal Rehman. Later he was joined and trained at the Sir J J School of Art in Mumbai. Mahadev Visvanath Dhurandhar, also called Rao Bahadur, a title bestowed on him by the British government in 1927.

Dhurandhar was exposed to the works of the European and British artists. Unlike Eastern cultures, where art was oriented towards line drawing, in the West, it was pictorially heavy. Fascinated by these forms of art, Indian students too began emulating the European Academic Art form, and Dhurandhar was a product of the same school of art. He painted a lot of figurative works and studies of people like Raja Ravi Varma. His famous painting, ‘Women At Work’, got him a British Government Award in 1892, while still a student. Yet another black and white illustration, ‘Marriage Ceremony’ won him a gold medal in 1908.

In 1896, Dhurandhar was invited by the Sir J. J. School of Art to join the institute as a teacher. In 1910, he was appointed the Principal, and in 1930, he became the first Indian to be appointed the director of the art school. In 1891 he won the Waddington Prize in Mumbai and won an award from Bombay Art Society, Mumbai in 1892. In 1894 he was awarded the Mayo Medal. In 1895 he received a Gold Medal from Bombay Art Society, Mumbai. In 1904, 1907, 1910 and 1914 he won Gold Medals from Fine Art & Industrial Exhibition in Mumbai, Pandharpur, Jalgaon and Gwalior. In 1952 the President of India appreciated his statue and exhibited it at the Centenary Celebration of Rajaram High School, Kolhapur.