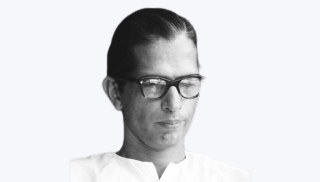 Being the son of an idol maker, KK Hebbar carried an inherent penchant towards art. Despite being trained in the Wetsern style, his artworks always managed to depict Indian flavour. In his initial days as an artist, Hebbar took to liking and was deeply influenced by the likes of Gauguin and Amrita Sher Gill and it was during this period where his works embodied one of the most influential works, a rich episode of Indian Art History.

His paintings were always a fine culmination of expressionism and impressionism in equal measure, tainted with socio economic themes like poverty, hunger, nuclear threat and similar. However, his was not a world full of dismay & despair as he could experiment gladly with his studies of Indian classical dances and infused the same while creating artworks on the theme. An avid traveller, he never stopped his journey throughout India which by all means inspired his artistic self to grow better.