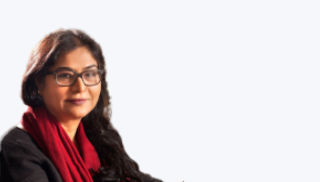 Jayasri Burman (born 1960 in Calcutta) is a contemporary Indian artist. She studied at the Kala Bhavan in Shantiniketan, and at the Government College of Art and Craft, Kolkata, where she completed a Master of Arts in painting. She went to Paris and studies print-making under Monsieur Ceizerzi.

She is a member of an extended family of eminent artists: her husband, Paresh Maity; uncle Sakti Burman who lives and works in France, though he is considered an Indian artist; and her cousin, Maya Burman. In 2005, she helped create an exhibition called “The Family” featuring work of all these artists.

Burman works mainly in watercolor, using rich strong hues and bold themes with a mythic element—strange hybrid animals with human heads, female figures. She has won several prizes for her art (which?). Her work has been exhibited in India, and overseas.

Jayasri Burman has been previously honoured by the Department of Posts & Ministry of Women & Child Development by the government of India  in the year 2007.

She has played an active role in ‘Ananya Festival’ a week-long celebration by the Ministry of Women and Child Development for International Women’s Day during 5–9 March 2007. These stamps have been designed by Jayasri and was released by the Hon’ble Vice President of India.

Other Notable Honours and Awards