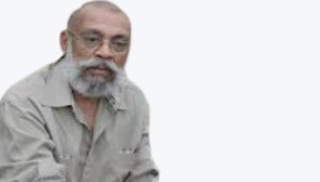 (1933 – Present)
Himmat Shah was born in Lothal, Gujarat in 1933. He joined the J J School of Art in Bombay, and then moved on to Baroda on a government cultural scholarship from 1956 to 1960. As a young artist at Baroda at the Faculty of Fine Arts, Maharaja Sayajirao University , Himmat Shah learnt avidly from N.S. Bendre in whom he saw the image of a modern artist, and from K.G. Subramanyan whose quest for language and appraisal of folk art stimulated him.
He then received a French Government scholarship on the recommendation of Octavio Paz, the poet diplomat. He went on to study etching at Atelier 17 under S.W. Hayeter and Krishna Reddy in Paris in 1967.

Himmat Shah was a member of Group 1890, a short-lived artist’s collective founded by J. Swaminathan. He has been described as a free thinker and intellectual, and these characteristics are evident in his creations. Himmat is a fan of modernism, and also draws inspiration from the artistic trends of both Western and Eastern culture. He is also known for his monumental marvels in terracotta, ceramics and plaster. His sculptures are shocking to the eye and fascinating to the mind – as he uses a combination of wide and slender shapes to create his work and believes in utilizing several different materials to fashion an art piece. His self designed tools and innovative techniques give his preferred medium – terracotta, a contemporary edge and at the same time rebuking consumerism. He loves employing elements that infuse & initiate feelings of time and age, of death and decay, in his sculptures.
He was Awarded by the All India Fine Arts and Crafts Society (AIFACS)New Delhi in 1996 and the Sahitya Kala Parishad Award by Govt. of Delhi in 1988. He has been conferred with the Kalidasa Samman by the Government of Madhya Pradesh in 2003.