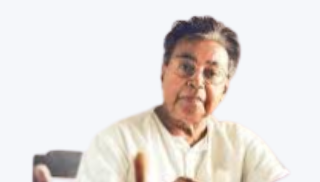 (1937 – 2013)
A shy, introvert artist, Ganesh Pyne received his formal art education from Govt.College of Art & Craft, Kolkata in 1959. He was deeply influenced and inspired by Abanindranath Tagore and Gaganendranath Tagore and started of his career with water colours. He later took to tempera and mixed media.
Perhaps one of the most notable among other contemporary artists belonging to the Bengal School of Art, Ganesh Pyne’s work shouts what one can refer to as neo surrealism, coupled with elements of fantasy, primarily having its roots in Bengali mythology and folklore. Beginning his artist career as an illustrator, he mainly worked in pen and ink knowing that there is still some time before he can actually afford to buy colours to paint. Soon after, he joined the Society for Contemporary Artists in 1963 and in due course became synonymous to the likes of artist like Shyamal Datta Ray, Ganesh Haloi, Bikash Bhattacharjee and Dharmanarayan Dasgupta.
He is often referred to as the “Painter of Darkness” owing to his undying obsession towards death that occurs as a recurring motif in his works in many mystifying forms. Pyne began working in watercolours and in due time shifted to use gouache and ultimately tempera, geared towards a large number of surrealist and abstract works.
He participated in several prestigious exhibitions which include The Paris Biennale in 1969, Contemporary Indian Art, Germany in 1970, International Festival of Paintings, France in 1975, etc.
Pyne was chosen for the Raja Ravi Varma award by the Government of Kerala & was also honoured with The Lifetime Achievement Award by the Indian Chamber of Commerce.