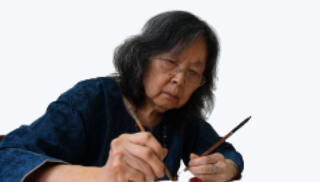 Chameli Ramachandran was born in Santiniketan in 1940. Barring a short interlude of two years (1947 – 1949) in China, Chameli spent her childhood and growing up years in Santiniketan. After schooling she joined Kala Bhavana and studied under masters, like Benode Behari Mukherjee and Ramkinkar. She obtained Diploma in Fine Arts and Craftes in 1960 and Masters degree in Ancient Indian History and Culture in 1966 from Visva-Bharti University, Santiniketan. Chameli married fellow student of Kala Bhavana artist A. Ramachandran in 1967 and moved to Delhi. She had a daughter ,Sujata and Son, Rahul Looking after her family and children did not give Chameli enough time to practice her own art even though she assisted Ramachandran in many of his projects. Together they produced over the years a large numbers of Childrens picture books writing and illustrating them, published in India, Japan, Korea and England. In early nineties when her children left India for higher studies abroad, Chameli look up Chinese ink and brush as a medium and developed it as her signature style.

​A person totally moulded by the philosophy of Rabindranath Tagore, She was always fascinated by the subtleties of nature be it a blade of grass, a flower tree, water body, hill or moving clouds, gradually evolving a minimal method of rendering her images using Chinese ink with touches of colous including gold and silver Chameli held her first one -man show in 1993 followed by a number of solo shows in Delhi, Baroda and London. She has also participated in some major shows like Millenium exhibition of “Art Today” in Delhi, “A Celebration of Colours” organized by Vadehra Art Gallery and Times of India inDelhi and Mumbai. “Solitude” organized by Appa Rao Gallery and CINEFINE in Delhi and Mumbai and 25th Anniversary Show of Vadehra Art Gallery in Delhi.

Chameli spends her winter months in North America where too she responds to nature surrounding her, which is reflected in her work.