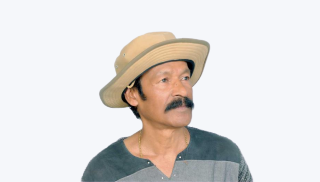 Bikash was born in Kaliyaganj, North Bengal. He studied at the College of Art and Craft, Kolkata, for five years and achieved his diploma in Applied Art with a gold medal. This was followed by a long stint of jobs in advertising agencies at Ahmedabad, Kolkata and Delhi as a Designer and Art Director. He turned to painting full time in the nineties, following the success of his shows of watercolors held in Delhi, Mumbai and other metros.

His works, which are technically brilliant, are for participatory viewing not for clinical analysis. The works are about expressions and evocations. They evoke memories in the viewer and these memories take the viewer directly to experiential references as well as artistic references. Bikash’s works, though predominantly naturescapes, feature human figures engaged in conversation. The nature represented is pregnant with tensions that are enshrouded in a tricky calmness. It is almost like the calm before a storm and the dialogue between these two figures, then could be nothing but the precariousness of life; caught in and between situations.