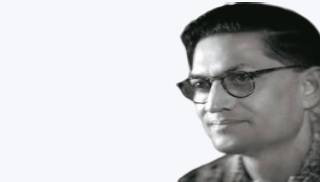 An Indian painter of Bengal school and assistant to Rabindranath Tagore at Shantiniketan, Asit Kr Haldar is considered to be one of the major artists of the Bengal renaissance. As an artist, he spent considerable amount of time between 1909 & 1911 in the Ajanta documenting frescoes.

In this expedition, he was accompanied with Lady Herringham in an endeavour to introduce cave art to Indian audience, on a wide scale. He worked as the principal of Kala Bhavan School from 1911 to 1923 and it was during this tenure when he assisted Tagore towards cultural and artistic works.

Additionally, as an art teacher, he also introduced different styles of art to young students, thus revolutionizing decorative and ceremonial displays. Haldar made a tour of Europe in 1923 only to realize that Realism in European art had numerous limitations and strive towards imparting balance to physical attributes in proportion as well as magnitude of the subject.

In an attempt to depict idealism in art, Haldar also created images from Indian history through his preferred mediums like lacquer, tempera, oil, watercolours. Besides being a painter, he was also a budding poet and tried his hands on photography.