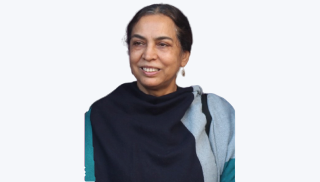 Arpana Caur was born in 1954, in Delhi. Her exposure to art, music and literature happened early in her life. She learnt the Sitar, wrote poetry but enjoyed painting the most. At the age of nine, she made her first oil painting, ‘Mother & Daughter’ inspired by the works of Amrita Shergil. Arpana graduated from the University of Delhi with a Master of Arts degree in Literature. She never received formal training in painting, and was largely self taught. She proceeded to receive training in the etching technique at the Garhi Studios in New Delhi, completing it in 1982. ]

Career
Influences and style
Arpana Caur’s paintings were shaped by the events and situations around her. Her mother’s strong influence on her extended into her works; where the ‘woman’ often occupies a central focus. Her works are also inspired by Pahari miniatures (hill-paintings), Punjabi literature, and Indian folk art.

‘Spirituality’ , and ‘Time’ are recurring themes in her works.

In the 1990s, Caur created a series of collaborations with Indian folk artists from the indigenous ethnic groups of Warli and Godna, who lived in the Madhubani region of the Indian state of Bihar.[5] She remains to be one of the first contemporary artists to have collaborated with folk artisans.

In 1994 she was commissioned a large work by the Hiroshima Museum of Modern Art to create a mural to mark the 50th anniversary of the bombings.

1995 Inside Out: Contemporary Women Artists of India, Middlesbrough Art Gallery