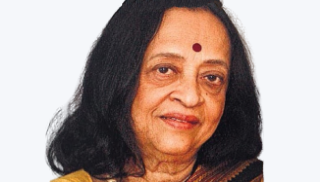 One of India’s leading contemporary artists, Anjolie Ela Menon carry an ancestry of both Bengali & American origin. She attended The Lawrence School, Lovedale in the Nilgiri Hills, Tamil Nadu and continued her education at the Sir J.J. School of Art in Bombay following which she earned a scholarship to study at Ecole des Beaux-Arts in Paris between 1961-1962.

Before returning home, she travelled extensively in Europe and West Asia studying Romanesque as well as Byzantine art. In 2006 her work “Yatra” was acquired by the Asian Art Museum of San Francisco, California. Her preferred medium to work is oil on masonite, besides glass and watercolour. She was awarded the Padma Shree in 2000.